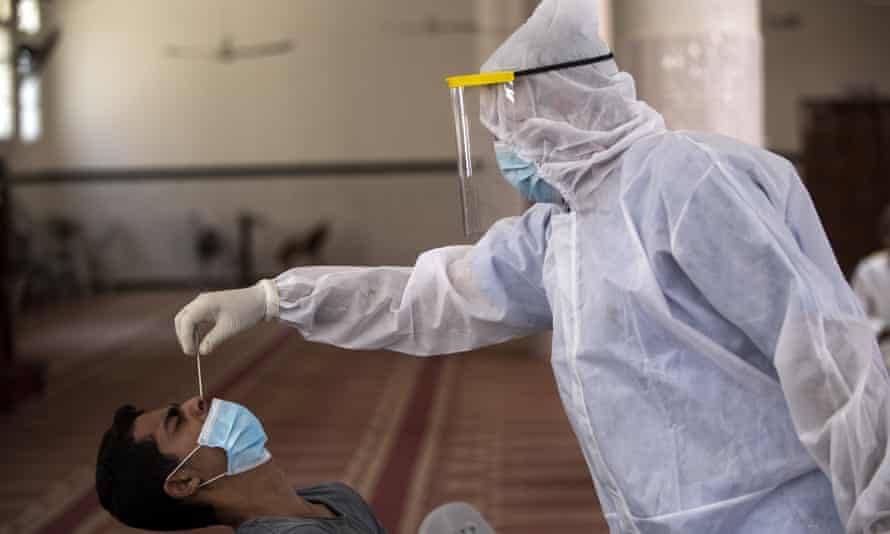 The Palestinian Authority said a planned transfer of Russian Sputnik V inoculations to the coastal enclave, which is geographically disconnected from the West Bank where the authority is headquartered, was blocked on Monday at an Israeli checkpoint.

“[T]he occupation authorities prevented their entry,” the authority’s health minister, Mai al-Kaila, said in a statement. “These doses were intended for medical staff working in intensive care rooms designated for Covid-19 patients, and for staff working in emergency departments.”

An Israeli security source told the Guardian that the authority had previously made a request to the national security council, a body that belongs to the Israeli prime minister’s office, to send vaccines to Gaza but that it had not made a decision.

The source said representatives from the authority had turned up at a West Bank crossing south of Ramallah with the vaccines on Monday but were not allowed to pass as the “request is still being processed”.

The source said: “This is still being reviewed. It’s not that there was a rejection by Israel. The claim that we denied the vaccines [to Gaza] is not true.”

The Guardian has contacted the Israeli prime minister’s office for comment.

Israel captured the West Bank from Jordanian troops in a 1967 war and its forces have remained there ever since. It took the Gaza Strip in the same conflict, although its military pulled out in 2005.

In coordination with Egypt, Israel maintains a strict blockade on Gaza, where the Islamist militant group, Hamas, rules over roughly 2 million people. Hamas seized control of Gaza from the Palestinian Authority in 2007, but they cooperate on several issues, including healthcare.

Debating on Monday, some Israeli lawmakers said the government should only allow vaccines into Gaza in return for concessions from Hamas. The foreign affairs and defence committee chairman, Zvi Hauser, said he wanted to know if Israel would demand the release of two captive Israelis and retrieve the remains of two Israeli soldiers being held by Hamas, “or at least ask for information about them”.

Ahmad Tibi, a parliamentarian from Israel’s Arab minority, said even a discussion about withholding vaccines from people who need them was shocking. “Your children will be ashamed,” he said, according to the Jerusalem Post.

While Israel is vaccinating all citizens over the age of 16, the country faces criticism for not offering to vaccinate several million Palestinians living in the West Bank and Gaza, where inoculations campaigns have barely started for vulnerable groups.

Israel agreed this month to transfer 5,000 Moderna vaccine doses to Palestinian medical workers in the West Bank, following international pressure. The Palestinian Authority has also procured 10,000 doses of the Sputnik V vaccine. It is planning to source the remainder from other manufacturers as well as a World Health Organization-led partnership called Covax, aimed at helping poorer countries.

Israeli officials claim that under 1990s-era Oslo peace accords, the authority, which has limited self-rule, is responsible for vaccinating Palestinians. However, the authority and rights groups, argue that Israel has a legal, moral and humanitarian responsibility as an occupying power to vaccinate Palestinians.