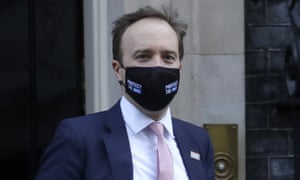 Covid vaccine take-up among health and care staff is so far notably lower than among age-based groups to have been offered the injection, Matt Hancock has said, increasing concerns that this could hamper progress in tackling the virus.

While take-up was more than 90% among the first four age groups to have been offered at least a first injection – which include all those aged 70 and above – for NHS staff it was about 80%, and for care staff “around two-thirds”, the health and social care secretary said. He did not specify whether the figures were for England or UK-wide, but as health policy, including vaccinations, is devolved, it is likely they are for England.

In a round of interviews after the news that the target of offering at least a first vaccination to all those in the top group groups seen as most vulnerable by Monday had been met in England, Hancock also stressed the government’s concern that take-up among black, Asian and minority-ethnic health and care staff is lower than average.

A preliminary study by researchers in Leicester, details of which emerged on Sunday, found significant disparities among health staff over vaccination rates.

While 65% of the workers within the study had received at least one shot, the figure was 71% for white staff, 59% for south Asian workers, and 37% of black staff.

The top four priority groups for vaccines were: older care home residents and relevant care staff; people aged 80-plus and frontline health and care staff; those aged 75 and over; and those aged 70 and over and people who are clinically extremely vulnerable.

However, he added, for health and care staff it was “a little bit lower”, at about four-fifths for health workers and two-thirds for social care staff.

Asked about the Leicester study in a separate interview with BBC Radio 4’s Today programme, Hancock accepted that low vaccination rates among BAME health and care staff was a concern.

“I haven’t seen that data, but I do know that the take-up in the NHS is rising,” he said. “It’s around four-fifths overall, but I also know that take-up among black staff and staff from other ethnic minority groups is lower,” he said. “There’s a very important programme of work to increase that, not just among healthcare staff but across the board.”

Speaking to Today, Hancock also confirmed that the UK government will look into the idea of vaccine passports – officially certified proof that someone has received their coronavirus vaccination – but only to assist international travel, not for domestic use.

“There are countries around the world who are proposing in the future, not now, that they will require proof of vaccinations,” he said.

“If they do that, we obviously want to make sure that Brits can fulfil that. There is a live international debate at work about how you can have credible proof that somebody’s had a vaccine, and obviously it’s important that we are part of that, to make sure thats Brits can show, in order to travel, that they’ve had the jab.”

He added: “That is different from us saying, for instance, we’re going to lift lockdown rules differentially according to whether you’ve had the jab or not. We’re not planning to do that.”